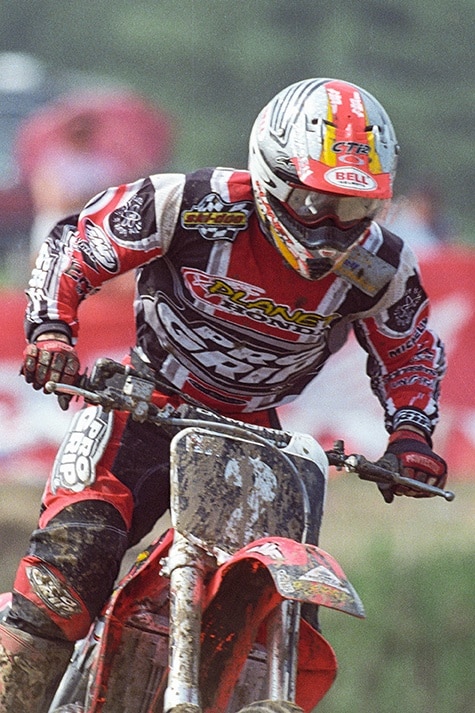 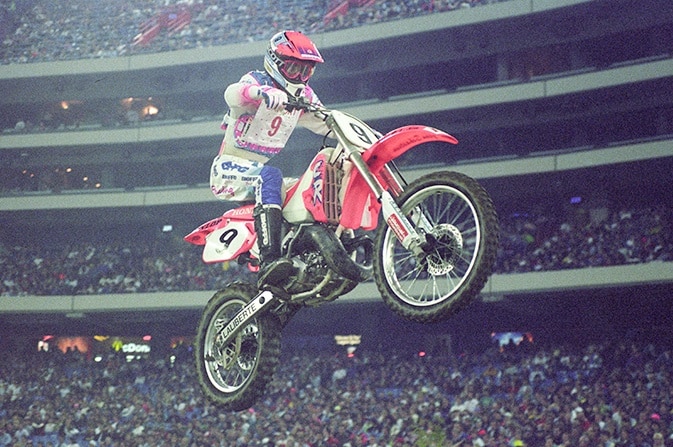 Compared to most of his contemporaries, who started racing dirt bikes as early as the age of nine, Jean Sebastien Roy, who was affectionately known as “JSR” to his legion of fans in Canada and the United States, didn’t get into sanctioned motocross competition until the age of 14. The fact that he was a relatively late starter, however, never deterred the Acton Vale, Quebec native from rapidly rising through the ranks. Practically from day one he exhibited a smooth, natural riding style. More importantly, he proved to be incredibly fast. Roy served notice early in his career that he would be a rider to contend with. In 1989 he won the CMA’s National 125cc & 250cc Novice Championships. A year later he claimed the 125cc National Intermediate Championship.

Roy wasted no time establishing himself as a top-10 pro rider. In 1991, his rookie year, he came on full force and nailed down a top-10 overall ranking by securing the National No.9 plate. The following two years a hard-charging Roy took home a No.3 ranking, silencing anyone who dared to suggest the amicable Quebecer was just another flash-in-the-pan.

Insiders predicted 1994 to be the year that the quiet, unassuming Jean Sebastien Roy would snare the coveted National No.1 plate. Canada’s “big three”, Ross Pederson, Carl Vaillancourt, and Alan Dyck, were at the tail end of their careers and JSR was their designated heir apparent. Roy was expected to lead a whole new generation of Canadian motocrossers to the checkered flag. But he had other, more ambitious goals in mind. A Canadian No.1 plate would have to wait. He focused his attention south of the border, where he quickly made his mark as a top-20 contender in both motocross and super cross.

Although Roy had set his sights on a career in the U.S., he did not entirely turn his back on Canada. In 1995 “riding only a selected number of CMRC Canadian National rounds” he easily captured the 125cc Championship crown. He missed out on the overall No.1 plate, however, which was still derived at by totalling the combined points of the 125 and 250cc classes. Despite campaigning only five of seven national rounds in 1998 “balancing his busy American schedule with the CMRC agenda” Roy came short of the overall No.1 plate by a mere seven points. He clearly was the fastest rider in Canada. On an international scale, a phenomenal JSR proved his mettle by hammering down ninth overall in the World Supercross Championship.

Meanwhile, back in the States, Team Planet Honda had picked up Roy to contest the U.S. Supercross and Motocross Championships. Riding Honda 125 and 250CR semi-works bikes, 1999 proved to be another banner year for JSR. He made an appearance at the first CMRC National of the season in Barrie, Ontario and annihilated the competition. A clean sweep of the 250cc class and a 2-1 moto overall victory in the 125cc was ample proof of his superiority. At Round 5, in Raymond, Alberta, the only other Canadian National on his schedule, Roy registered another 250cc win on the strength of 1-1 motos. But the first of a series of injuries, suffered in the tough-as-nails U.S. Supercross Series, would become Roy’s main liability by the end of the season and into the next. Still, he won the prestigious Montreal Supercross to close off the Canadian dirt bike racing season.

JSR rode three of the nine CMRC National rounds in 2000 to once again shake up the status quo. Despite suffering from back problems, compounded by an ankle and knee injury, he scored 2nd overall in the 250cc class at Round 4 in Grunthal, Manitoba. In a season that was dominated by American riders, Roy took the honour of being the first Canadian to win a 250cc round that year. He grabbed the overall at Round 7 in Ulverton, QC, thanks to 1-4 motos. At the prestigious Walton TransCan Grand National, the final round of the series, an unleashed Roy won the first moto by an incredible 20-second margin over runner-up Marco DubÇ. A possible overall victory escaped him when he DNF’d moto two.

At the end of the 2000 season Roy signed a lucrative two-year contract with Calgary-based Team Blackfoot/Honda Canada, to officially pursue the CMRC 250 National Championship. He would finally return to Canada to fulfil his destiny, which for all intents and purposes was to make sure his name made it into the motocross history books as the holder a 250cc No.1 plate. Without it, he would become little more than a footnote in the annals of Canadian motocross.

There was probably no rider under more pressure to win a championship than JSR in the 2001 title hunt. Everyone, including Roy himself, expected a successful finish to what would be a long 10-rounds season. From day one, however, a super motivated Roy stepped up to the plate with a solid third overall, based on the strength of 1-8 motos. An overall victory followed at Round 2, thanks to 1-2 motos. In the remaining eight rounds Roy missed the podium just twice. He booked a tepid 13th overall in Raymond, Alberta, where crashes and a flat tire saw him register 9-18 motos respectively. In Walton, Ontario, where heavy rains cut the schedule in half, he finished fourth overall in the one-moto affair.

At the final round of the western leg in Grunthal, Manitoba, JSR scored another overall victory by hammering down 1-2 motos, resolutely taking command of the points chase. Once unleashed on the sand tracks of the east, Roy convincingly recorded three back-to-back-victories, including his home-track race in Ulverton, QC. When all was said and done he had accumulated 375 points, 18 more than chief rival and teammate, Blair Morgan.

The JSR era had officially begun. For the next four seasons Roy ruled Canadian motocross with an iron fist, shutting down contenders from the USA, Europe, and South Africa to claim the 250 National Championship in 2002, 2003, 2004 and 2005. Roy remained with Blackfoot till his retirement in 2008.

I realized my dreams and reached my goals, Roy said when he announced his retirement. For his swan song, Roy rose to the occasion going out I style and rewarding his many home-province fans with his fifth win at the Montreal Supercross.