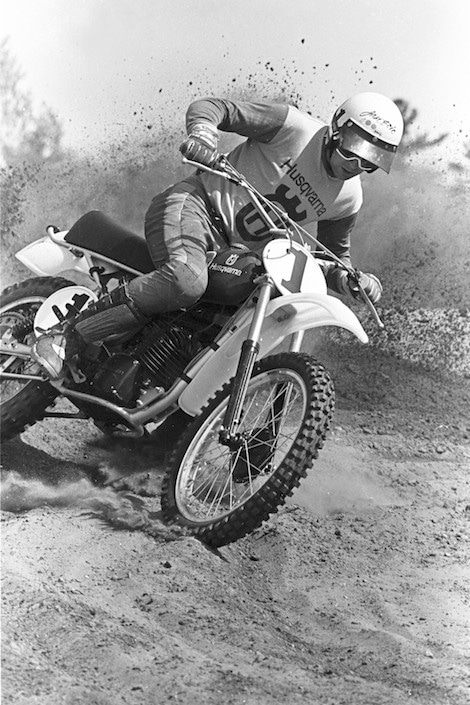 Although 1960/70s Swedish motocross sensation Jan-Eric Sällqvist wasn’t the first foreign import to contest the Canadian National Motocross Championship, he was by far the most successful. Riders like Finland’s Seppo Makinen and Jorma Rautiainen, and Czechoslovakia’s Zdeno Syrovy and Vlastimil Valek, had preceded and won national No.1 plates before Sällqvist but none tallied his total championship booty. Sällqvist collected during his Canadian tenure between 1974 and 1977.

Sällqvist was born December 12, 1946 in the small town of Värnamo in the south of Sweden, entering his first race as a 250 Junior in 1963. Like many future champions, he didn’t have to ease into the sport; he finished the day with second overall. In 1966, Sällqvist entered his first 500cc World Championship GP in Austria and raised eyebrows by taking sitxh overall on a Swedish-built Husqvarna.

Between 1969 and 1972, Sällqvist was a member of the Swedish ISDE Team, winning Gold in Czechoslovakia and the Isle of Man. He first ventured to North America to race the 1971 Inter-AMA 250 Series in the United States, finishing second overall aboard a Husqvarna. In 1972, he achieved one of his main goals by winning the 125 Swedish Championship, following up that success with third overall in the 1973 250 Championship. Despite his success in Europe, Canada beckoned and a World Championship round in Quebec would change his life forever.

“I was racing in Canada for the first time in St.Gabriel de Brandon in the 1973 Grand Prix. I got second place after Jiri Stodulka from Czecho,” explained Sällqvist in charming, Swedish accented English. “After this race I started to discuss a future racing in Canada with the racing manager for the Manley Kawasaki Team, Carl Bastedo.”

Sällqvist and Bastedo reached an agreement for the Swede to contest the four rounds of the ‘74 National Championship, the five-rounds Molson Series in Ontario, and the five-rounds Laurentide Series in Quebec. He would become the teammate of Finlander Heikki Ylonen, who had been brought over to Canada by Kawasaki in 1971 to develop a competitive mx bike for them. Finally, in February 1974, Sällqvist and his wife Inger, son Stefan and daughter Charlotte, made their move to Canada.

“The first two months we stayed in some small motel just outside of Toronto. It was very cold and it was a tough time for the family,” Sällqvist recalled. “The first weekend I was in Canada I started ice racing and I became the Canadian Champion in the 500cc class.”

When the motocross season got underway Sällqvist didn’t disappoint. He won the 500 and 250 Nationals and garnered the overall No.1 plate based on the accumulation of points in those two classes plus the 125 class, which was won by Ylonen. For good measure the Swede hammered down the overall in the Molson Series points chase, much to the delight of Kawasaki and Bastedo.

“Canada had lots of talented young motocrossers in the early ‘70s but they lacked discipline and conditioning. Jan-Eric was one of many European riders who impressed me with his work ethic. I hired him because I knew he approached racing like most Olympic athletes approach their sports,” said Bastedo. “I also wanted him to influence the younger Canadian riders and help make them professionals.”

Bastedo went on to explain that Sällqvist was riding motorcycles far inferior to the other Euro imports, many of whom had works GP bikes. His professionalism and determination, along with his mechanic Cliff White’s brilliant work, allowed Sällqvist and Kawasaki, a brand virtually unknown on the world scene in the early 70s, to enjoy a great measure of success.

The 1975 MX Nationals proved to be a battle of international proportions with Canada’s top riders playing little more than supporting roles. Among the heavy hitters from abroad, in addition to Sällqvist, were the Americans Mike Runyard and Buck Murphy (Can-Am); Japan’s Nicki Kinoshita (Yamaha Canada) and Masaru Ikeda (Suzuki Canada); Finland’s Kari Nissinen (Suzuki Canada), Rautiainen (Kawasaki Canada) and Makinen (Husqvarna Canada) and the Czechoslovakian Valek (CZ Canada). Sällqvist, despite winning only the Open class, bagged enough points to score his second overall No.1 plate. Runyard won the 250; Ikeda rode off with the 125 title.

In the Molson Series the Swede once more proved himself head-and-shoulders above the competition. He hammered down another overall victory in the points chase; ditto for the Laurentide Series, this time around. To put the icing on a very successful Canadian season he garnered fifth overall in the 125 U.S. Nationals and sixth overall in the 250 Supercross Series. A banner year to say the least!

The following season, 1976, Sällqvist followed Bastedo’s exit from Kawasaki and switched to Husqvarna. He fought hard to retain his championship status but a collision in the mud-bogged final Open class moto of the series knocked him off his bike and out of contention for the No.1 plate. He lost the title to California’s Jim Turner (Suzuki Canada) by a mere nine points. The Swede was able to take satisfaction, however, by winning his third and final Molson Cup. Kinoshita, meanwhile, proved his worth by claiming top honours in the 125s. Canada’s elite riders could only stand by and watch a foreign sweep of their series.

For the 1977 season, which would be his last, Sällqvist switched to the now-defunct German-built Maicos. He wanted nothing less than to exit the stage with another national No.1. By boldly garnering the championship points in the 250 and 500 class, he did exactly what he had set out to do. The decision went down to the final moto, however. In BC’s Bill McLean he had met his match. When all was said and done, Sällqvist beat McLean to the Open class championship and the No.1 plate. A week later he was gone.

“The time I spent in Canada was one of the best in my life,” said Sällqvist from his home in Sweden. “And not just because I won championships, but because of all the really good people I met and who treated me so well. I also had good luck because I got Cliff White as a mechanic. Cliff was one of the best mechanics in motocross.”

Once back in his homeland, Sällqvist proved he was as adept on a thumper as on a 2-stroke. He scored the 1978 Swedish 4-Stroke Championship aboard a then, newly-developed Husqvarna. After retiring from competition, he held down the presidency of the Swedish Motorcycle Association from 1985 till 1995. In 1994, he became a member of the International Motorcycle Federation’s (FIM) Motocross Commission and, to this day, attends World Championship events as Jury President.