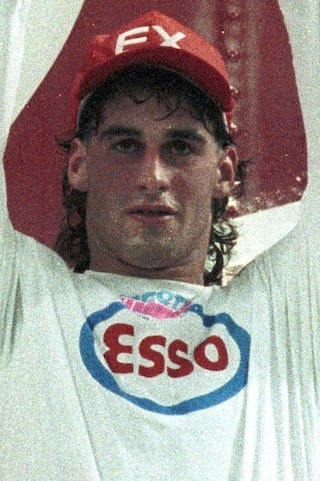 Although Quebec has produced many great dirt bike racers from day one, Carl Vaillancourt may be considered the La Belle Province’s first big-name motocross star. In 1990, Vaillancourt, nicknamed the “Drummondville Flyer,” established himself as the top rider in Canada by defeating arch-rivals Ross Pederson and Allan Dyck. In a National series that was still based on the results of all three displacement classes, Vaillancourt nailed down the No.1 plate by snaring top points in the 500 class and consistently scoring in the 125 and 250.

Born July 30, 1969 in Drummondville, QC, Vaillancourt rode his first motorcycle, a 50cc Honda, at the age of seven. Two years later, in 1979, he took up motocross in the 80cc Schoolboy class. His first few years in the sport were not kind. He broke his shoulder in the first race of 1980 and was out of action for the rest of the season. The following year he broke his leg after being T-boned by a fellow rider and was again sent packing before the season even got underway.

Vaillancourt finally got the opportunity to showcase his natural racing talent in 1983, when he moved into the Provincial Junior ranks. He garnered second place in the 125, and third in the 250 Quebec Championships. He entered the 1984 season full of confidence only to be taken out by another rider again. Once more he suffered a broken leg and was sidelined for the season.

In 1985, Vaillancourt transferred to the Senior class (Intermediate). He made an impressive debut, leaving no doubt he was headed for greatness down the road. “The Flyer” captured both the 125 and 250 Quebec Senior Championships and the 250 and 500 National Championships that year. In 1986, Vaillancourt turned Pro and immediately established himself in the national top-10. Although riding only two of the three displacement classes he nailed down a seventh overall ranking in the Canadian Expert Championship.

From 1987 onward, Vaillancourt was virtually unbeatable at home; he won the Quebec Championship in all three displacement classes five years in a row. In 1994, the year the 500cc class was dropped, he snared the 125/250 provincial titles. On a National front, from 1983 till his retirement in 1995, Vaillancourt only once found himself outside of a top-three overall ranking. In 1991, a separated shoulder caused him to miss a number of National rounds. Despite the injury, he still garnered an impressive fifth place ranking.

Although The Flyer was equally adept at riding bikes in all three classes, it was the big daddy 500cc where he really shined. He won the points chase in that division in 1990, 1992 and 1993. Arguably, next to Pederson, Vaillancourt is the best 500 rider Canada has ever produced.

Vaillancourt retired from motocross at the relatively early age of 26 to work full time in the family business, R.Vaillancourt Portes & Fenetres, which has been on the Drummondville industrial scene for more than half a century. A number of years after his retirement Vaillancourt returned to the sport as a colour commentator for both French and English language coverage of the Canadian Nationals.