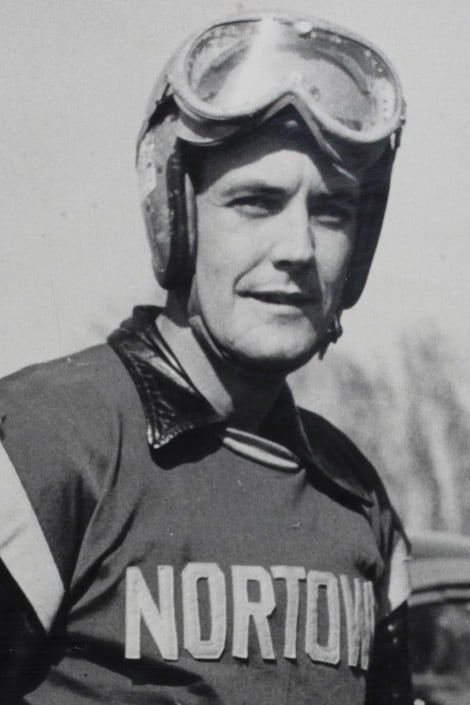 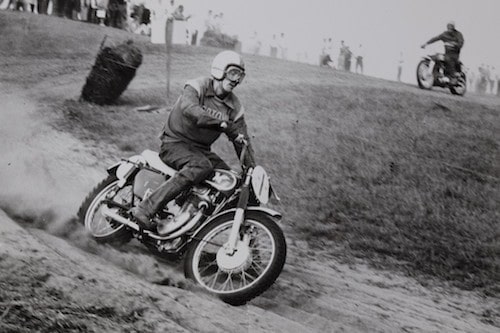 Scrambles, dirt track, enduro, trial, road racing and endurance, in a career that spanned 22 years, Bill Sharpless rode them all. And he wasn’t just a dabbler. He tackled each discipline with panache, verve, and a winning form, earning himself the handle of “all-rounder” in the process. With national and provincial championship titles in scrambling, trials, and enduros, Sharpless goes down in the record books as one of the few riders to ever accomplish this feat in Canadian motorsport.

Toronto-born Bill Sharpless is one of the pioneers of Canadian off-road competition, among the elite of his era, and an inspiration to many of his successors. He started racing in 1953, when motocross still went by the name of “scrambling” and competition dirt bikes hadn’t been invented yet. Off road racing in the fifties was done with motorcycles that were little more than 250 to 500cc street machines. They were technically unsophisticated and far from dirt friendly. DNFs were common and even the slightest rider error was unforgiving.

For Bill, these were minor inconveniences, however, and he was one of the winningest riders of his generation. He scored his first Canadian Enduro Championship in 1955, reclaiming the title in 1966, 1967 and 1972. From 1958 to 1961 he garnered the coveted “White Trophy”, an honour bestowed upon the rider who accumulated the most points in the various disciplines, and with it, the overall No.1 plate.

Although road racing championships eluded him, Bill was recognized as one of the discipline’s top competitors, both in Canada and the United States. In 1961, riding for Triumph USA, he was first in the 500cc 125 Daytona time trials and finished the race in sixth place, betrayed by a flat rear tire. That same year he racked up a victory at Indianapolis, a second at Watkins Glen and a third at Laconia.

Finally, in 1962, winning event after event, Bill seemed to be well on his way to nailing down a 500cc Canadian road racing championship. One second place and one DNF was enough, however, to see the title go up in smoke. While leading the 125 Daytona that same year, he suffered a serious crash that left him with a broken leg. Problems with the leg and mounting business and family responsibilities reluctantly forced him into semi-retirement.

When Bill resumed competition in 1965, only enduros and trials remained on his active agenda, but every now and then he’d show up at a road race or motocross. In 1968 he booked his final career motocross victory at an event in Pickering, Ontario. His racing days were far from over, however. In 1969 he started an annual trek overseas to compete in International Six Day Enduros in Germany; Spain (Bronze Medallist 1970); England; Isle of Mann (Silver Medallist 1971); and the former Czechoslovakia. Rheumatoid Arthritis, first diagnosed in 1969, put a definitive end to his career in 1975.

The Sharpless name, however, would remain at the forefront of Canadian and international motorcycle racing for many years to come. Having virtually grown up in the world of motorsport and the dealership/garage business, it was inevitable that the Sharpless children Toni, Blair, and Todd, would take to bike racing like ducks to water. Like their dad, they became proficient in all areas of competition. But as demanded by the changing times, each would specialize in one discipline.

Toni, a strong-willed woman who defined her own space and presence, was one of the first top female Canadian road racers. She went on to international acclaim in the late ’80s as an endurance factory team rider, scoring top-10 finishes in 12 and 24-hour events in Europe and Japan. She was also one of the first women to qualify for the Daytona 200.

Blair not only won an impressive 14 national and numerous provincial enduro championships, he garnered the coveted ISDE Gold Medal in 1989. He also served as Ross Pederson’s mechanic during the mid-80s.